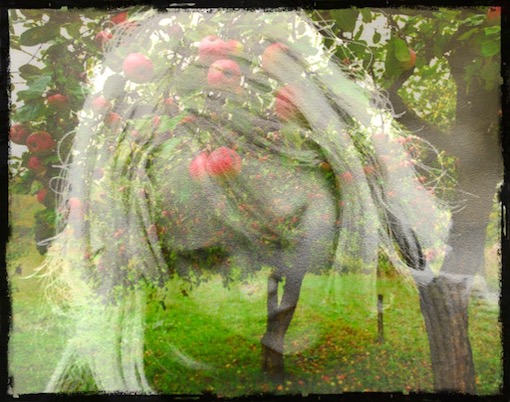 I grew up with a tree, we were sprouts and saplings together. It was a gift from my dear aunt to my father, a James Greave apple tree as we learned the name proudly. We didn’t have a big garden but it was a world to me. A place of adventure and refuge to an imaginative and lonely child.

I knew the nature of the wall, the secret world in the corner where the bins are, the magical flow of the willow tree where I would hide and bop unsuspecting passers by with its branches, (long before J.K. Rowling’s whomping willow was conceived). The apple tree faithfully gave fruit in September, wonderful apples, crisp and just the right balance of sweet and sour. It was also a treasure for scrumpers, wasps and blackbirds, not just a central part of my world.

The tree was a part of my family for 45 years, my father lived in the family home until his death two years ago. I had the agonising job of dismantling the house and a life time of possessions.

I dutifully hired a gardener to maintain the garden which had grown lovely over the years.

It was a mixture of great sadness and relief when the house finally sold. I pretty much put it aside and moved on with my life. Until yesterday, when I got a letter saying they’ve cut down the tree. It really hurts, not just because of my feelings for it, but a fear and fury about my fellow humans. What kind of person would destroy a beautiful old tree like that.